The article by Shanmugam et al. (2000) is a welcome addition to the scant sedimentological literature on the Oriente Basin and its continuation in Colombia, the Putumayo Basin (Higgs, 1997a). Shanmugam et al. (2000) reinterpreted the Hollin and Napo T-U sands as tide-dominated estuarine deposits, rejecting a previous deltaic model. Neither model, however, accords with the stated lack of evidence for subaerial emergence. An alternative, tidal shelf interpretation is promoted here, and petroleum reservoir implications discussed. Also, although Shanmugam et al. (2000) did not report any sequence boundaries, their data suggest that angular (tectonic) sequence boundaries occur at the base of the A and B limestones, signifying possible incised valleys cutting into the U and T sands, again important for oil exploration.

Arguments for Shelf, Not Estuarine, Deposition

The lack of evidence for emergence is difficult to reconcile with an estuarine or deltaic interpretation, because in humid climates (tropical paleolatitude [Smith et al., 1980]), marshes comprise a large areal percentage of the delta plain or estuary (30-80%) (e.g., Shanmugam et al., 2000, figure 24a); therefore, deltaic or estuarine successions should correspondingly contain a large proportion of marsh facies (rooted coal beds; paleosoils), unless one appeals to either of two special cases: (1) ravinement has removed all of the marsh facies, which seems overly fortuitous; or (2) the study area is small enough to fit entirely within the subaqueous delta slope or central/outer estuary. The latter explanation is not applicable: Sacha field (Begin page 330) itself is nearly small enough (25 x 5 km) (Canfield, 1991) to fit inside the Oosterschelde estuary modern analog of Shanmugam et al. (2000, p. 672; "mouth … 7.4 km wide"), but the overall Hollin-Napo T-U facies association continues laterally for more than 100 km in all directions, with no known breaks (see following sections). A second modern analog given by Shanmugam et al. (2000, p. 673), the "Bristol Channel estuary" ("mouth … 38.8 km wide,"), is not an estuary but a shelf seaway, narrowing eastward to the Severn estuary.

The characteristic Hollin-Caballos and Napo-Villeta T-U facies association (see previous sections) extends for at least 150 km north to south (Oriente-Putumayo Basin). About 200 km farther north, across the Garzon mountains, the same Caballos facies reappear in the Upper Magdalena Basin (Corrigan, 1967; Florez and Carrillo, 1994; Renzoni, 1994). The east-west extent is at least 100 km in the Oriente Basin (e.g., Dashwood and Abbotts, 1990, figure 5 isopach maps). This great areal extent is clearly more compatible with a shelf than with estuaries or deltas. The depositional environment was a broad, north-south marine shelf stretching from Bolivia to Venezuela in the Aptian-Santonian, according to Pindell and Tabbutt (1995, figures 4, 5). According to Corrigan (1967, p. 231), "The Caballos and the Une represent the shelf facies of the great marine transgression in Aptian-Albian time," expressed on the eustatic chart of Haq et al. (1988).

An incised-valley (fluvial and estuarine) interpretation, applied to parts of the Hollin and Napo T-U intervals by White et al. (1995) and other workers, was rejected by Shanmugam et al. (2000) because seismic profiles and well-correlation panels at Sacha field suggest that incision is absent or minor below and within the Hollin and Napo formations. A lack of incised valleys, however, would also condemn the estuarine model of Shanmugam et al. (2000), because estuaries occupy incised valleys by definition (Dalrymple et al., 1992).

Given the angular unconformity at the base of the Hollin Formation (Shanmugam et al., 2000), incised valleys might occur on that surface, possibly explaining lateral thickness variations in the lower Hollin-lower Caballos interval (White et al., 1995; Amaya, 1996). Such incised valleys would be expected to contain fluvial and/or estuarine deposits (Van Wagoner et al., 1990) and to be confined to the lower Hollin-Caballos. In contrast, virtually the entire Hollin-Caballos interval was interpreted as fluvial and estuarine by White et al. (1995) and Amaya (1996).

Diverse lines of evidence support deposition of the Hollin-Caballos and Napo-Villeta T-U intervals on a tide-influenced shelf. The facies association is remarkably similar to that of other formations interpreted as tidal-shelf deposits (e.g., Anderton, 1976; Higgs, 1996) and to modern tidal-shelf deposits (Belderson (Begin page 331) et al., 1982; Stride et al., 1982). A shallow-marine interpretation is already well established for the Hollin (Baldock, 1982) and Caballos formations (Corrigan, 1967; Govea and Aguilera, 1980; Caceres and Teatin, 1985; Cooper et al., 1995, figure 5), although an estuarine model was recently proposed for the Caballos (Amaya, 1996; Amaya and Centanaro, 1997; Ramon and Pavas, 1999), similar to the Hollin (Shanmugam et al., 2000).

Unlike subaqueous bars in estuaries or delta fronts, the orientation of tidal-shelf bars is not necessarily constrained by the orientation of the coast. Modern shelf bars in northwest Europe are slightly oblique to the direction of net sand transport (Kenyon et al., 1981; Belderson et al., 1982), which itself depends on the tidal-current circulation and velocity-asymmetry pattern. Thus, subsurface prediction of shelf sand-bar orientation requires detailed knowledge of paleogeography.

The Hollin-Caballos and Napo-Villeta T-U sands are respectively overlain by the C, B, and A limestones over much of the Oriente-Putumayo Basin (Caceres and Teatin, 1985; Govea and Aguilera, 1985; Dashwood and Abbotts, 1990, figure 4). The A and B limestones were interpreted as "regional transgressive" deposits by Shanmugam et al. (2000, p. 671), although not studied by them. In my experience, these so-called limestone units are actually interbedded shale and argillaceous limestone, the latter comprising concretionary bands and nodules, formed of calcite-cemented shelly siliciclastic mud. The argillaceous composition produces a high gamma-ray response (Shanmugam et al., 2000, figures 3, 23, 26). The concretion-precursor shelly mud may have resembled the "skeletal wackestone" described by Shanmugam et al. (2000, p. 663; also figure 19), which occurs as thin beds in Hollin and Napo T-U shales (their facies 7). These thin shelly beds were possibly deposited as calcarenite and calcirudite storm beds, which were then burrow-mixed with the background siliciclastic mud, masking bed boundaries. Because of the mud matrix, the A, B, and C limestones have minimal primary-porosity potential but are locally capable of producing oil from fractures.

No sequence boundaries were reported in the Hollin or Napo formations by Shanmugam et al. (2000), except the basal unconformity. In a correlation panel from Sacha field, however, the T and U sands vary considerably in thickness, in marked contrast to the overlying B and A limestones and the underlying shale unit, which are relatively tabular (Shanmugam et al., 2000, figure 26). This geometry suggests that the limestones overlie angular unconformities formed by folding and erosional planation prior to limestone deposition. Similarly, correlation panels at Coca-Payamino and Gacela (Begin page 332) fields (location shown in Shanmugam et al., 2000, figure 1) show a tabular limestone/marl unit (C-equivalent) capping a nontabular upper Hollin interval (White et al., 1995, figures 15, 16), suggesting a sub-C angular sequence boundary.

The inferred sublimestone unconformities imply intermittent tectonism during Hollin-Napo deposition, in agreement with (1) seismic profiles showing syn-Napo growth of Oriente Basin anticlines (Balkwill et al., 1995, especially figure 7) and (2) interpreted synsedimentary fault control of T and U sand thicknesses in Libertador field (Lozada et al., 1985; field location shown in Shanmugam et al., 2000, figure 1). The tectonic pulses were probably compressive (Balkwill et al., 1995) or transpressive (Baby et al., 1998), causing subtle basement-block uplifts in an "embryonic foreland basin" (Balkwill et al., 1995, p. 568), related to eastward subduction below an active arc to the west (Macellari, 1988). (Contrast the passive-margin interpretation of Pindell and Tabbutt [1995, figure 4] and White et al. [1995].) Each uplift episode caused brief emergence of the Hollin-Napo shelf or of small islands localized on growing anticlines. Marine transgression then beveled the highs by ravinement, and shelf deposition resumed. The switch from siliciclastic tidal sands before each uplift episode to calcarenite storm beds after each uplift episode reflects a change in paleogeography and a decrease in terrigenous sand supply, the latter reflecting rising relative sea level and/or perhaps a climate change resulting in increased aridity. A climatic-tectonic genetic link may have operated, whereby a large intraforeland tectonic block east of the Oriente-Putumayo Basin was uplifted synchronously with, but much higher than, the Oriente-Putumayo anticlines, each time producing a rain shadow (assuming easterly prevailing equatorial winds) whose effectiveness progressively decreased because of erosional lowering. A candidate for this rain-shadow maker is the Chiribiquete massif of Colombia (INGEOMINAS, 1988), a range of hills up to 1000 m high, composed of Paleozoic rocks, and oriented north-south, parallel with the anticlines of the Oriente-Putumayo Basin.

Unrelated to these sublimestone tectonic sequence boundaries, White et al. (1995, p. 585 and figure 12) proposed three eustatic sequence boundaries, at the base of the upper Hollin and the Napo T and U intervals, corresponding to the Haq et al. (1988) eustatic falls at 98, 94, and 90 Ma. These are type 1 sequence boundaries, and the upper Hollin, T, and U are incised-valley fills, according to White et al. (1995). Type 2, however, is more likely, given the evidence for shelf, rather than fluvial or estuarine deposition of these units (see previous discussion). The commonly sharp base of the T and U sands (e.g., White et al., 1995, figure 9; Shanmugam et al., 2000, figures 23, 26) is consistent with eustatically forced regressions emplacing inner-shelf sands (bars or sheets) on outer-shelf muds (Plint, 1988). Failure of each eustatic lowering to expose the shelf indicates that the subsidence rate exceeded the (nonglacial) rate of eustatic fall, consistent with a tectonically active foreland basin. 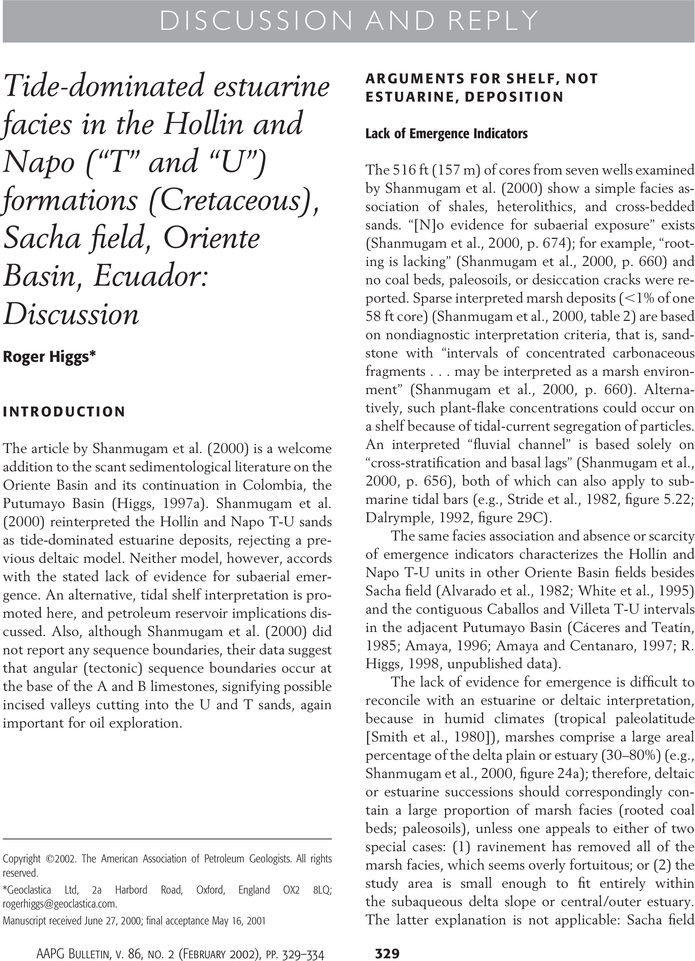 Members of AAPG receive access to the full AAPG Bulletin Archives as part of their membership. For more information, contact the AAPG Membership Department at [email protected].