It is important to note that reflection seismic data does not provide a cross-section detailing specific rock type. Seismic data is a measure of reflectivity, changes in acoustic impedance, measured in time. Information about the subsurface geology is inferred from the seismic data and geologic control, such as well logs, is required. Since seismic data is measured versus time, the exact depth to a reflecting horizon can only be determined if the velocity of the media is known. Velocity is the unknown variable. Many aspects of the 3D project design, acquisition and processing methods are utilized to gain a more accurate estimation of the subsurface velocity.

The acquisition and processing of seismic data involves many of the same technologies as the communications industry. Specifically the sampling of analogue waveforms and the digital processing of that information. The rate at which one samples the data is one of the main determining factors in the resolution capabilities. Sampling occurs in time, typical surveys are sampled at 2 millisecond, or 500 times per second. 3D seismic surveys are sampled in space as well, the source and receiver intervals are the digital sampling of an analogue waveform at the earth's surface. How closely sampled the seismic data is directly determines the size of the geologic anomaly that can be resolved. The frequency content of the data is another factor in the resolving power of the final data volume. Typically, the frequency content is determined by the type of source used to generate the sound waves and the digital processing methods used to recover those frequencies. The initial sampling of the seismic data, in time and space, is a limiting factor on the frequency content. Noise and the attenuation properties of the earth serve to limit the resolution of the data.

To obtain the maximum resolution from the seismic data volume the data must be correctly positioned in x, y and t. With knowledge of the velocity field of the subsurface the data can be regarded as being correctly positioned in x, y and z (depth). It is important to understand that the seismic data does not necessarily lie directly beneath the source or receiver, or even beneath the straight line traverse between them. 3D acquisition and processing techniques, specifically "3D migration", are what image the data in its correct spatial location in the subsurface.

Many errors associated with using 2D data are due to the fact that the reflections on a section need not be in the plane of the 2D traverse. The reflections presented on a 2D profile are those reflections recorded on the surface of a cylinder. For abrupt features such as pinnacle reefs, a 2D line can record the image of the reef but incorrectly portray the location as being beneath the 2D traverse. 3D seismic will accurately image the reef in its correct location. Extreme velocity gradients used to tie 2D data to well control can also be resolved once 3D techniques are used to correctly position the subsurface geology. The primary advantage of 3D methods over the previous seismic methods is twofold ...

1. The position of the reflectors (structure) is known.

2. The changes in the seismic data character can be used to infer changes in lithology. 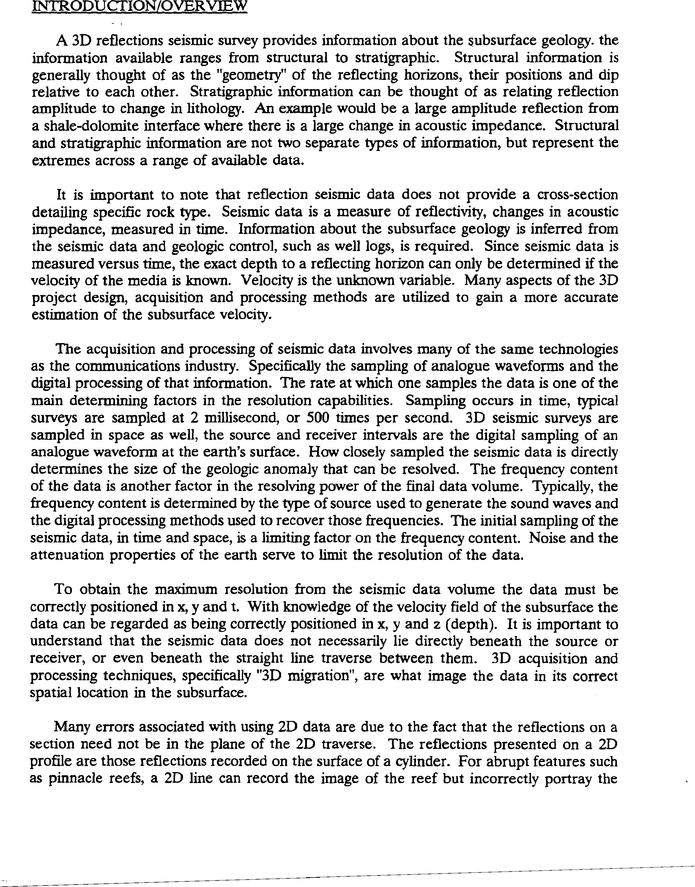