The omission of reference to some key publications in this article, particularly the source of the biomarker data used (Lake, 1989), is of concern. More importantly, the explanation of apparent maturity reversals in hopanoid distributions and the inferences about the onset of oil expulsion do not appear to be substantiated by the data presented.

It is stated that only the most volatile-matter-rich, hydrogen-rich members of isorank sample suites show reversals in the C29 and C30 moretane:hopane ratios at high rank. However, the sample upon which this reversal trend is primarily based, 31/110, has a lower H/C ratio than most other coals (Fig. 14), and not abnormally high volatile matter content (Fig. 2) or HI (Fig. 13). It is not clear why the sample is classed as hydrogen-rich in comparison with the others.

To explain the apparent maturity reversals in moretane:hopane and 17a(H)-norhopane:17a(H)hopane ratios, comparison is made between hydrocarbon phase migration behaviour and open-tubular gas-liquid chromatography. In this form of GLC, for members of an homologous series or group of compounds like the hopanes with very similar chemical structures, it is differences in saturated vapour pressure that determine the amount of time each member spends in the inert mobile gaseous phase relative to the liquid stationary phase and hence retention time. So the comparison with oil migration is not really valid. The.dissolution of liquid hydrocarbons in a gaseous hydrocarbon phase would be controlled by solute partition coefficients rather than saturated vapour pressures, and there would be no significant difference in behaviour between adjacent members of an homologous series. If there were, only the lightest condensates would be expelled initially from coals (the effects of molecular diffusion on primary migration have been described elsewhere; e.g. Mackenzie et al., 1988). The proposed mechanism cannot account for the biomarker distributions observed in generated oils. Under the prevailing temperatures and pressures during hydrocarbon generation, a single supercritical phase is likely rather than separate liquid and gaseous phases (e.g. Killops et al., 1996), so Conclusion 9 - that expulsion of oil in gaseous solution is responsible for reversals in biomarker maturity parameters - is unlikely to reflect the true conditions.

Although the C29/C30 and C31/C30 hopane ratios appear to support the proposed model of differential distribution of hopaness between the residual coal and expelled oil phase, a discrepancy can be seen by plotting C29/C31, which should show an even more marked decrease than the ratios involving nearest C-number members. However, the ratio increases with increasing rank. There have been a number of articles that consider the observed biomarker behaviour, which appear to have been overlooked by the authors (e.g. Bishop and Abbott, 1993; Requejo, 1994; Farrimond et al., 1996). The effects of generation of biomarkers from kerogen/coal with different distributions from those in the initial bitumen, together with subsequent differences in resistance to thermal degradation, as cited in these articles can explain the observations for NZ coals It is also not clear whether the

authors have considered the potential effects of co-elution of other triterpanes with the hopanoids studied, particularly 18

Conclusion 6, that oil biomarkers only match those of coals before significant oil generation has occurred, seems unfeasible. Either the hopanoid distributions of the oils are accounted for by some mixture of expelled oils, or the coals have not sourced the oil. There are some; other comments made about expulsion that do not appear to be substantiated by the data presented. That S2 shows no consistent behaviour to at least high-volatile A rank is argued to suggest only minor hydrocarbon expulsion has occurred up to this rank. It is also proposed that S1+S2 stays higher in hydrogen-rich samples to greater maturity, showing that expulsion occurs later in them than in less H-rich coals. However, the data in Fig. 16 show that S 1+S2 declines at about the same rank in both types of coal. Because S2 is much larger than S 1 and measures the remaining generation potential (given a suite of coals of similar initial hydrocarbon potential - which is in doubt when the NZ coal band is superimposed on Fig. 14), it is difficult to see how S1+S2 provides information on expulsion. The lower values of S 1+S2 in the least hydrogen-rich coals is more likely a reflection of their lower hydrocarbon potential. There is no clear evidence of the proposed suppression of hydrocarbon generation in hydrogen-rich vitrinites, and it is difficult to conceive of a process that would suppress the bond-cleavage reactions involved. 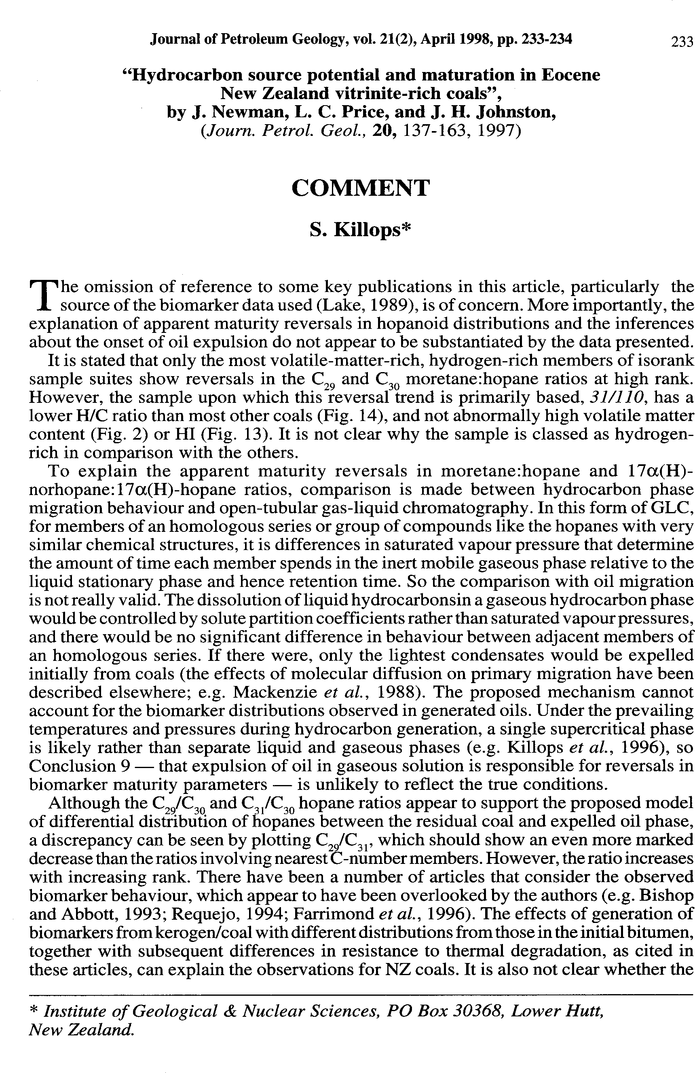