John C. Dolson is a Senior Geological Associate with BP-Amoco, currently assigned to the BP-Amoco Egypt Business Unit in Cairo. He received his B.S. in natural science from The Colorado College (1971) and an M.S. in earth science from Colorado State University (1981). He joined Amoco in 1980 and has explored for hydrocarbons in the Hugoton, Anadarko, Rocky Mountain, and Cook Inlet (Alaska) basins (U.S.A.), Caspian (Azerbaijan) and Pre-Caspian basins (Khazakhstan, Gulf of Suez, and Nile Delta. Dolson cochaired an Amoco symposium on stratigraphic trap exploration in 1989 and the Cairo '98 AAPG Hedberg Conference Integrated Structural and Sequence Stratigraphic Analysis in Rift Settings. He has a keen interest in the application of computing technology and workstations in recognizing and evaluating subtle traps. Dolson has written over 20 papers on stratigraphic traps and coedited the 1994 RMAG publication Unconformities and Hydrocarbons in Sedimentary Sequences.

Mike Bahorich is currently Vice President of Exploration and Production Technology with Apache Corp. in Houston. He received a B.S. in geology (1978) from the University of Missouri and an M.S. in geophysics (1981) from VPI in Blacksburg, VA. His first decade at Amoco involved prospect generation and development. He then spent three years with Amoco Research in scientific and management positions and received patents for the Coherence CubeTM and interval/volume seismic attributes (a technology developed with Landmark Graphics and currently named PAL). He later became a resource exploration manager in the company's Mid-Continent operations. In 1996 he began his career with Apache. Bahorich was an organizing member of the 1992 Society of Exploration Geophysicists Sequence Stratigraphy Workshop. He is currently First Vice President of SEG and was recently awarded "Best Paper in Geophysics." He was also awarded the 1998 SEG Virgil Kauffman Gold Medal.

Rick Tobin is a senior staff geologist with BP-Amoco's Upstream Technology Group in Houston. He received geology degrees from James Madison University (B.S., 1977) and the University of Cincinnati (M.S., 1980; Ph.D. 1982). His technical specialties and current research interests include sedimentology, sedimentary petrology and diagenesis, fluid inclusion thermometry, and related thermal maturity technologies. Tobin has been actively involved in both exploration and development activities associated with reservoir quality and stratigraphic prediction worldwide. He is an active member of AAPG, SEPM, and Sigma Xi.

Louis J. Terlikoski is a geophysicist with Statoil who received his B.S. degree in geology from the University of Massachusetts in 1982 and worked as an exploitation geophysicist for Gulf Oil Exploration and Production in New Orleans prior to joining Amoco in 1985. He has been exploring for turbidite reservoirs in the deepwater trend of the Gulf of Mexico since 1988. He is a member of AAPG and SEG.

Michael Hendricks received his B.A. (1971) from the University of Colorado and an M.S. (1977) and Ph.D. (1982) from the Colorado School of Mines. He has worked in the petroleum industry, both as an exploration geologist and consultant. His interests include stratigraphic modeling, sequence stratigraphy, and reservoir characterization. He is currently the president of Hendricks and Associates, Inc., Englewood, CO. 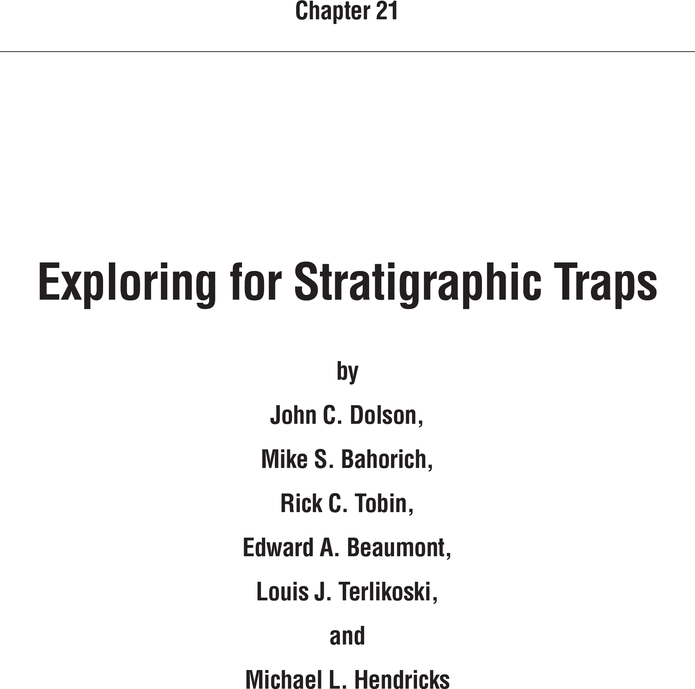