THE AIM OF THIS CHAPTER is to present a general view of the technologies which have been most useful to the oil finder. Specific applications of these technological resources in time and place are manifest in other chapters. Technological facilities determine the style and capability of petroleum exploration. Progress has been continuous but uneven, depending largely on industrial resources, cumulative scientific and technical knowledge, and experience gained in deployment of new instruments and ideas. The rate of change sometimes has been revolutionary. Pressures consequent to the first World War accelerated the process so sharply that the year 1920 seems a convenient divide between two major eras. Improved drilling machinery and novel coring and testing devices and sampling methods pened a new underground world to inspection. Geological prospecting before 1920 was concerned mainly with surface evidence, and most petroleum geologists were engaged in mapping surface structure. Attention turned increasingly to the subsurface thereafter, and by 1930 data from drilled wells and from geophysical surveys were the principal criteria. A second revolutionary period followed World War II, when burgeoning demand for petroleum products and the deficiency in field operations which had been cumulative during the years of depression and war caused an unprecedented surge in exploration and development. Research establishments in the oil industry increased in number, size, and effectiveness as exploration efficiency depended more and more on technical innovation. The great oil and gas fields of 1970 were found by means which were beyond the dreams of 1920.

The author deems it fortuitous to have been able to enlist the expertise of Charles V. Millikan, of Tulsa, Oklahoma, for the account of drilling and oil-field operations which is Part I of this chapter. Mr. Millikan joined Amerada Petroleum Corporation in 1922 and remained with that company until he retired as chief petroleum production engineer in 1961. He has been a member of the Association since 1920. During his long tour of duty with Amerada he had a prominent role in developing some of the technologies which are the subject of this discussion. The American Institute of Mining, Metallurgical and Petroleum Engineers awarded the Anthony F. Lucas gold medal to him in 1944 for "outstanding work on reservoir behavior and control," Honorary Membership in 1965; and the Society of Petrol um Engineers of AIME has conferred various honors upon him in recognition of his accomplishments. His contribution of the following Part I is gratefully acknowledged.

Parts II and III of this chapter are the work of the writer (Owen). 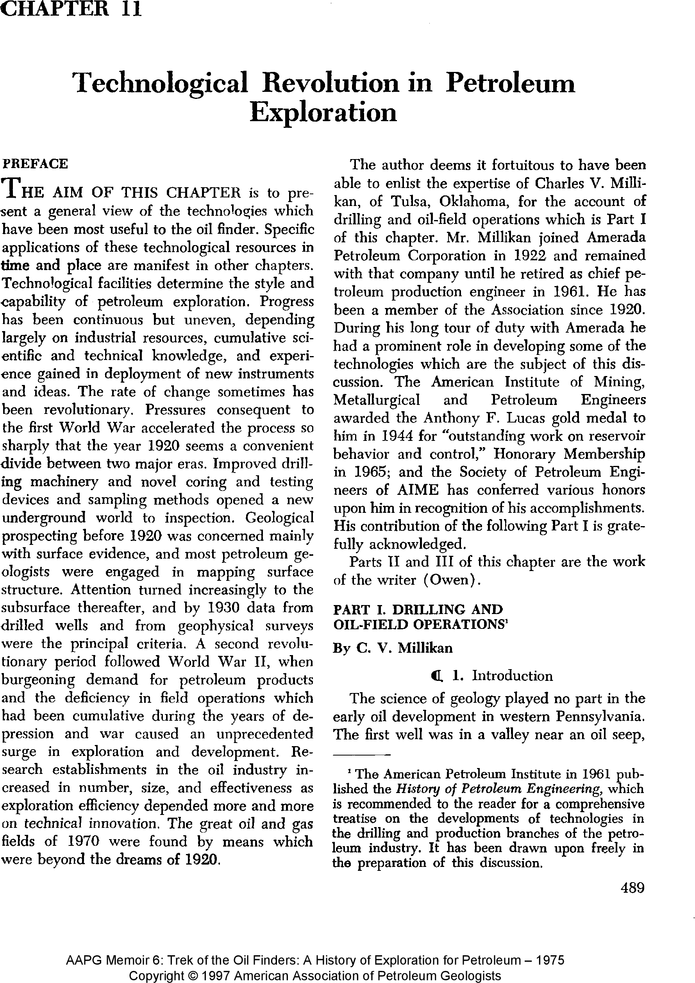